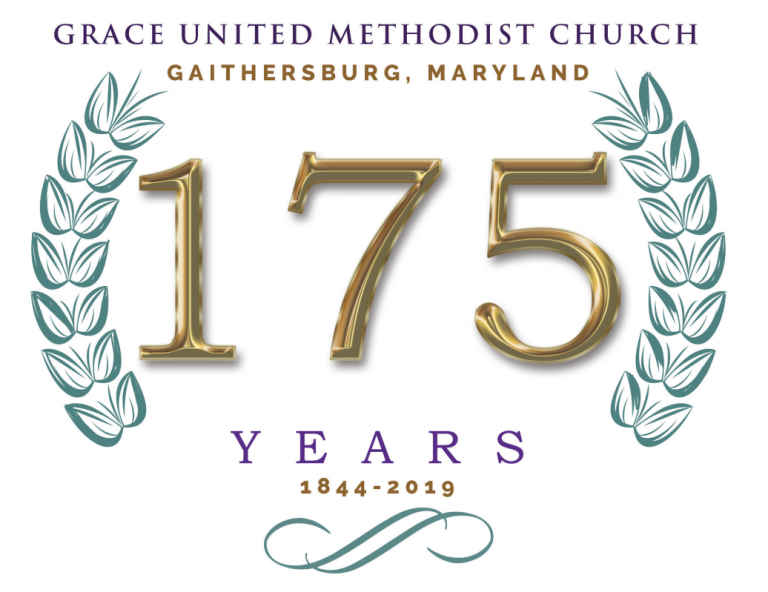 Beginnings
The history of our church can be traced back to the original Methodist Episcopal congregation in the Gaithersburg area in 1844. It was originally called English’s Class, named for the class leader, Thomas English, and later known as the Middlebrook Class. The first class meetings were held in Mr. English’s and other members’ homes, often conducted by circuit-riding preachers from the Rockville Circuit of the Baltimore Conference. As the group expanded, it met in the St. Luke’s Presbyterian Meetinghouse, a small two-story building that looked more like a home than a church. The Middlebrook Class survived intact during the Civil War – most of the members were Southern sympathizers, although the original class leader, Thomas English, favored the North. When the war ended, the Baltimore Conference, the Rockville Circuit, and many of the individual congregations split. Most joined the Methodist Episcopal Church, South, which was formed the same year as the Rockville Circuit. In 1867, 60 Southern-sympathizing members of the Middlebrook Class built what was to become our parent church on Frederick Road, where the Forest Oak cemetery is now located. Its official name was the Gaithersburg Methodist Episcopal Church, South, although it was more commonly referred to as the Forest Oak Church. The northern sympathizers who withdrew formed Epworth Methodist Episcopal Church.

The new Forest Oak church was built by the men of the congregation, who donated their labor. When the building was dedicated on November 17, 1867, there were about 60 members, mostly area farmers. Scharf’s 1882 History of Western Maryland described the church as “a beautiful frame structure.” It had a bell tower and steeple and was painted a buff color. There were tall plain glass windows protected by shutters on the sides of the building and small stained-glass windows in front. The church had a simple pump organ, kerosene lamps for lighting, and two wood stoves near the back of the sanctuary for heating. Years later, some members recalled that on winter Sundays it was too hot in the pews next to the stoves and too cold in the pews further away.

Plans for Expansion
The congregation grew steadily, and by 1887 it was large enough to support its own circuit. A parsonage was built near the church, and the Gaithersburg preacher was also responsible for serving small churches in Darnestown, Germantown, Boyds, and Travilah. By 1903, the Forest Oak congregation had grown to more than 250 members, and the building had become too small to accommodate them all. Plans were made to study ways and means of expansion. In 1904, the congregation acquired land for a new building from two church members, Carson Ward and John Wesley Walker. The site, our present location, was on Frederick road, at the corner of the lane leading to the Mr. Walker’s farm (now Walker Avenue). The lot was nearly adjacent to the site Epworth Methodist Episcopal Church had occupied on Brookes Avenue since 1891. A committee visited churches throughout the area looking for a suitable design for the new church. The design chosen most closely resembled the Grace Methodist Episcopal Church, South, in Middletown, Virginia, which happened to be the hometown of David Harris, Forest Oak’s previous pastor.

Building plans were drawn by Baltimore architects Frank and Henry Davis. The contract for construction of the new sanctuary was signed by the end of November 1904, and the work began early in 1905. Workers were recruited from as far away as Pennsylvania. As the work progressed, a cornerstone laying ceremony was planned for May 20th. Thomas Lambert, the preacher in charge, was a personal friend of the Maryland’s Governor Edwin Warfield and invited him to participate. On the day of the event, all Gaithersburg businesses closed at 3:00 so everyone could attend. The Pentalpha Masonic Lodge laid the stone, and about 2,000 people were in attendance.

The size of the crowd was especially impressive, considering that the most recent census (1900) counted Gaithersburg’s entire population at only 547. The building of the new sanctuary proceeded very rapidly, and dedicatory services were held December 10, 1905. According to the Montgomery Sentinel, the total cost of the church and grounds was $17,000. The paper reported that the church membership included some of the most prominent and wealthy citizens of Montgomery County. The photograph of Walker Avenue looking east was taken from the bell tower ca. 1912. Grace UMC purchased the house in the foreground (3 Walker Avenue) in 1959.

Grace UMC’s Early Years
Early photographs of the completed building show that from the outside, the church looked much like it does today, except for landscaping and the later additions. But inside, there have been major changes over the years. An acetylene generating system supplied fuel for the lights. By 1913, electricity was available and the old system was retired. A coal furnace under the sanctuary generated steam for the heating system. The rest of the basement (Owen Hall) wasn’t dug out until 1919. Gaithersburg didn’t have a water and sewer system until the late 1920s, which is when toilets and running water were first installed in Owen Hall. Two windows that were behind the pulpit were later moved from that wall to the sides of the choir loft. There were pews in only the front of the sanctuary, and at that time the first four rows had no center aisle. The back of the sanctuary was used for Sunday school classes, the two sections being separated by large folding doors. At first, there was no pipe organ. One of the members appealed to the Carnegie Foundations for funds for a new organ. They donated $750 after the congregation raised an equal amount. In December, 1916, the Moller Organ Co. of Hagerstown completed the installation.

Addition of the Forest Oak Building
By the time of the celebration in 50th anniversary of the sanctuary in 1955, there was a critical need for more meeting rooms for Sunday School classes and other groups.

The Methodist Youth Fellowship began a fund drive for a new educational building. At a Special Quarterly Conference in January, 1959, the church membership voted to expand. To make room for the addition, as well as to allow for future expansion, the church purchased adjacent land. The building plans called for a modified Georgian Colonial addition. A one-story section included a large 17×30 ft. multi-purpose room (the Wesley Room) and modern restrooms. The two-story building extended across the back of the parsonage lot and included seven classrooms. Following a major fund raising crusade, groundbreaking ceremonies were held April 10, 1960, and construction began immediately. The cornerstone was laid on June 25, 1960, with the Pentalpha Lodge of Masons officiating, just as they had 55 years before with the original building. Five months after groundbreaking, a Consecration Service for the completed building was held September 11, 1960. The addition is now known as the Forest Oak Building.

Addition of the Walker Building
Within 15 years, rapid growth in our membership again resulted in a serious lack of space.

In 1977, a task force was established to develop recommendations for our church’s second major expansion. Early in 1979, however, Bishop James Matthews and Merrill Drennan, the District Superintendent, urged the congregation to abandon their plans of expansion and consider relocating to a site near Asbury Methodist Village or in Montgomery Village. The concern was that it would be difficult for the church to continue to grow with the increasing commercialization of the surrounding area. But many members, especially those with long ties to the church, were strongly opposed to abandoning the historic sanctuary, and at an all-member meeting in February 1980, the congregation voted overwhelmingly to remain at the Church’s present historic location and to expand its facilities. Plans for the major addition called for seven classrooms in the two-story section of the new addition, a large fellowship hall with an adjoining kitchen, four new offices, and a parlor/library. The old Philathea classroom between the sanctuary and new lobby would be converted into a History Hall. Two sides of the new building and the 1960 addition would form a small courtyard with a ground-level entrance into the church. The old parsonage at 1 Walker Ave. was torn down, and a new parsonage was purchased at 1 Brighton Lane. The cornerstone for the new wing, now known as the Walker Building, was laid on April 18, 1982, and by that fall, the building was ready for occupancy. A service of consecration was held on September 26, 1982.

Grace UMC in the Gaithersburg Community
At the time of the Middlebrook Class, Gaithersburg was a rural community of a few hundred people. First settled in 1765, it had been called Log Town, Germansburgh, and Forest Oak.

The little town was not incorporated until 1878, more than a decade after the construction of the Forest Oak Church. Most of the members were farmers, and their social life centered on the church. One of their major mission projects was the establishment of a church for Methodists in the Quince Orchard area, about 4 miles southwest of Gaithersburg. Some Forest Oak members left to join the mission church and help it get started. The new church was named McDonald Chapel, in honor of Rev. William McDonald, Forest Oak’s preacher who died in 1903. The chapel, which was served by our preachers for nearly 50 years, is no longer standing. Its congregation was one of three that formed nearby Fairhaven United Methodist Church.

For several years, Grace UMC was active in the temperance movement, and it was illegal to sell liquor in the city of Gaithersburg. Grace UMC supported the Women’s Christian Temperance Union (WCTU). An announcement for a special service held at the church in 1917 urged members not to forget to wear their white ribbon bow and “sit in the front pews and let it be seen that you are out and out for the temperance cause.”

In the early 1920s, former Grace UMC preacher J. Judson Ringer became heavily involved in the efforts of the Conference to build a residence for the elderly and orphans in Gaithersburg. Rev. Ringer became the first superintendent of the Home of the Aged and Orphans of the Baltimore Conference of the Methodist Episcopal Church, South, Inc., which opened its doors in 1926. The Home grew into what is now Asbury Methodist Village, although the planned orphanage was never built. Since that time, many Grace UMC members have been Asbury residents.

After the second World War, the ladies of the church held their first fund-raising dinner in Owen Hall. At that time, the kitchen area in the church basement was primitive. It had a dirt floor, there were no cupboards, the worktables were planks laid on sawhorses, and the only way to heat food was with hot plates the women brought from home. In spite of these conditions, the dinner cleared $900. The dinners and an accompanying bazaar continued for 25 years, becoming famous throughout the area.

It was not until 1939 that the Southern and Northern branches of the Methodist Episcopal Church were finally reunited. In Gaithersburg, the initial competition between Grace and Epworth gave way to cooperation and joint ventures such as Bible School and youth activities. Today, the congregation of Grace UMC is one of the most diverse in the area, having come full circle from the early days of the Methodist Episcopal Church, South,

Grace church has long been one of the city’s historically significant structures. In May 1996, the mayor and city council of Gaithersburg, as part of their recognition of National Historic Preservation Week, presented a Certificate of Recognition to the congregation. It reads, “To the congregation of Grace United Methodist Church for outstanding restoration and preservation of their church at 119 North Frederick Avenue.” The certificate is signed with a note of special thanks to Grace UMC from Mayor Bohrer for taking such loving care of a city landmark.